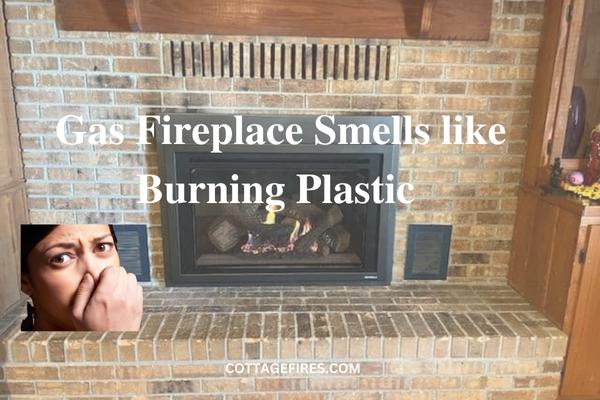 Feeling cold? Let’s turn on the gas fireplace to get some warmth. It’s getting warm, but in no time, you start to smell some bad odor, as if plastic is burning, and after some time, your room stinks.

Have you ever wondered why?

There are several reasons for this, which we will discuss in more detail below.

It is commonly observed that the odor comes from the gas fireplace, usually when it is a new unit used for the first time. This happens because the factory’s chemicals or paint on the product are getting burned. They get released once they are heated. When I first used my gas fireplace, I got panicky but later learned it was completely normal.

A gas fireplace gets installed in your existing fireplace. When turned on, they appear to react with the existing building materials, such as glue, cement, or non-metallic substances. This causes odors to be released the first few times you use it.

Odors released during the heating process are considered normal; just make sure to ventilate your space by opening any windows and doors. Within a couple of hours, the plastic or chemical odor should dissipate.

Gas fireplaces are a seasonal product; I meant to say most people don’t use them in warm seasons. This leads to the accumulation of dirt, and when the fireplace is lit for a few hours after a long time, it burns off any type of debris and dirt that has been accumulated. And thus, it smells like burning dirt.

We talked about all the internal issues that led to the odor, but the most important thing to consider is the air quality, as the fireplace uses this, which cannot be compromised. Ventless gas fireplaces draw air from the inside of the room, so if there are any products in the room that emit a fragrance, they are sucked in, and the fragrance is released by the fireplace, resulting in an odor.

If the burning plastic smell lasts longer than a few hours, it must be noticed carefully, as the product or its components might be damaged.

If the circuit board has been damaged, your fireplace will not perform efficiently or properly. In such a situation, contact customer care or the technician to check for signs of damage.

Getting Rid of Burning Plastic Smell

So here are a few things you can do to get rid of this smell:

The first step is to simply open the window and ensure that the surrounding area is ventilated. The odor will be gone within a few hours. Call the gas center if it remains for more than 3–4 hours, even after proper ventilation.

It is normal for the plastic burning odor to persist when using the gas fireplace for the first time; this is usually the result of the burning of various substances such as dyes, paints, materials, and so on. But if the smell remains despite constant use and ventilation, contact your service technician immediately to check for any damaged components or leaks.

Gas fireplaces work efficiently and are in demand because of their convenience. But to maintain longevity, it’s important to maintain them regularly. So it is highly recommended to service them yearly for safety and efficiency.

Consider it this way: you went on vacation during the summer, and even after that, you did not feel a need to use the fireplace until it got really cold. And now, in the winter, it’s really cold, and you turn on the gas fireplace, but now it smells weird as if some odor is coming out of it.

This is only because the dirt accumulated for so long inside them is getting heated up and burning, causing this smell.

Is it Dangerous for a gas fireplace to smell like Burning Plastic?

No need to worry; it is not dangerous.

It is natural to smell a burning plastic smell when the unit is new and has been used very little. The smell is because of the different materials that are being heated up. But it’s only okay if it’s a new unit or has been installed recently; if not, check for any major faults.

Yes, kerosene odors occur due to the byproducts of burning ventless gas logs.

Does Gas fireplace leak, and smell like burning plastic?

A gas fireplace can smell like burning plastic as all the accumulated dirt, dyes, and different materials start to burn off and produce this smell.

And yes, there could be a gas leak if the smell does not fade even after a few hours of proper ventilation, which is dangerous.

Your fireplace generally smells like plastic burning because it has not been used for a while or is a new product. Also check if gas fireplace smells like gas, we have covered detailed guide on it.

But remember that if this odor stays longer than expected, it could be a gas leak or another defect. In such a case, contact a technician.